If you’ve ever worked in an agile software team, you’ve most likely encountered the term Daily Standup Meeting (DSM). A brief — if you’re lucky — gathering, where team members share their updates about the project they’re working on.

The interesting thing about daily standups, is that every team has its own variation, own set of rules, which makes them unique. Some DSMs are well thought out, some are rather ad-hoc, but if you’ve worked in multiple teams, I’m sure you can point out which ones were better than others.

Since the DSM is such an integral part of a team’s day-to-day, I think it’s a good investment to give some thought to it and make it effective and meaningful. I personally came across a few different variations myself and gathered some do-s and don’t-s that might help to improve the effectiveness of your dailies.

Stop blabbering a.k.a. cut the 💩

I think a daily becomes inefficient when people start to blabber, talk unnecessarily about things which provide little to no value to the team or project. If everyone does this, a 5 minute standup can quickly turn into a 30 minute monster meeting. That’s two and a half hours of your life per week! 😱

I’ve been in dailies where we stand up, form a circle and talk about what we did yesterday in a counter / clockwise order. Let’s call it freestyle daily. This format requires a lot of discipline from the members to focus only on stuff that matters, as people can get sidetracked pretty easily here, like talking about some detail that doesn’t provide any extra value, it’s just there to fill the space.

A common mistake why people blabber is because they want to prove to the team or some boss that they were super busy and working hard yesterday.

When I first started out as a developer and participated on these freestyle dailies I got into the same trap. I really wanted to tell my team that I indeed gave absolutely everything yesterday, so I talked and talked about what I did, preferably in long sentences.

Dailies shouldn’t be about accountability, to prove that you were busy yesterday. People are really good at keeping themselves busy, and still provide no value. Instead, it should be about short and meaningful sentences which carry useful information to the team, about the project. 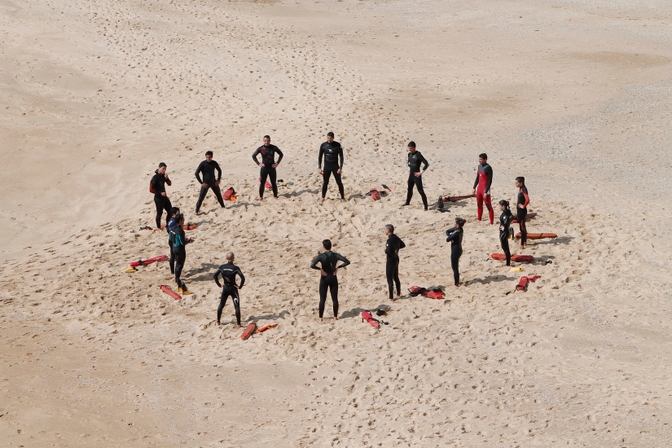 Focus on the board

So if the freestyle DSM requires a lot of discipline to avoid blabber, how can we make it easier for the team?

When you’re working in an agile team you also probably visualize your work on some sort of physical or virtual board (such as JIRA or Trello). ‘To do’, ‘In progress’, ‘Done’, maybe a couple of other columns but at the core they are the same. Your team creates cards on this board for each task and move them around — preferably from ‘To do’ to ‘Done’ — representing the actual progress of the respective task.

A step into the right direction to improve your daily standup meetings is to put the board in the focus.

When going around, team members should look at the board and talk about the cards they are assigned to. This helps people to remember what they were actually working on and what is progress of each task. This can already cut out some unnecessary sentences.

Cards instead of people

While looking at the board when going around during the daily can increase the effectiveness, there is another tip which actually builds on using the board.

Instead of focusing on the order of people in the daily, put the cards in the spotlight.

You go through the cards on the board in a certain order, and each person tells the update about that specific card only, the person whoever is assigned to it, opposed to everyone talking about all their cards in a single go and passing the ‘mic’ to the next person.

One of the philosophies in Agile / Kanban is ‘stop starting, start finishing’. The basic idea is that we should prioritize finishing tasks that are already in progress instead of starting new ones increasing the team’s throughput.

There’s a lot more to it, but this is not in the scope of this blog post. If you’re interested diving deep into the Kanban philosophies such as this, I recommend the aptly named Stop Starting, Start Finishing book. But what does this have to do with order of the cards?

Applying the ‘stop starting, start finishing’ idea, we should go from right (Done) to left (To do) on the board, starting with the cards that are the closest to ‘Done’ as they are the most important.

So going from right to left (and top to bottom in each column for completeness) we have our card order. From the team members’ point of view the order of talking and how many times each person need to talk is different every day, and this actually comes with a subtle benefit.

The overall focus on the daily itself will be higher as people need to be on their toes in order to talk at the appropriate time(s), so the team’s information flow should increase during the daily.

This effect can actually be greater during a remote setting, as during a people-based daily, once your turn is over you might be tempted to tab out of the meeting and distract yourself, be it news, social media etc.

Before we move on, I’d like to point out one drawback of the card-based instead of people-based talking which is added time. Due to often back and forth switching between teammates there will be some overhead compared to everyone saying everything they want to say and move on. However the card-based talking can cut out blabber — reducing the overall duration of the daily — and adds some other key benefits pointed out above, so I’d still prefer the card-based compared to the people-based approach.

What should I say

We now know who needs to talk when and about what card. The last question is, what should I actually say about the task? There’s still a chance that people will start blabbering not revealing anything valuable. Coming back to the ‘stop starting, start finishing’ philosophy, for each card we should focus on the following question:

What needs to be done, to advance this card further to the right (towards ‘Done’)?

Answering this question will reveal blockers / difficulties and will minimize excess talking.

One could ask about the ‘Done’ column, should we even talk about it? I’ve been to teams which skipped the done cards entirely, and ones that didn’t. It’s really up to the team, but my take on it is to have little to none talking about ‘Done’ cards as it invites useless talk. Done items can be presented at a recurring ‘demo session’, where the team can solely talk about what was done in that period.

Of course we’re all humans, there will be other topics we need to discuss from time to time.

Leave some space after finishing the board to talk about anything else.

These can include administrative stuff such as absences, meetings, etc. This is the last part of the daily, which should be much shorter than the board part.

The daily standup meeting is an essential part of the day for an agile team. We want to reduce the noise during the daily, increase the focus and its overall effectiveness.

We’ve looked at several techniques, such as focusing on the agile board, or more specifically on the cards instead of people.

We touched on the ‘stop starting, start finishing’ philosophy, which led us to look at the board from a right to left direction and gave us a way to effectively talk about each card: what needs to be done in order to move the card to ‘Done’.

Also don’t forget have a short block at the end of the daily to talk about miscellaneous stuff.